FOOD: Why I Love to Cook

I can’t recall the exact moment I fell in love with cooking, but it was early in my life. My mom has always guided the development of my of talents and learning my way around the kitchen was no different. One of my earliest recollections of cooking is making a single fried egg in a small pan. I could barely reach the stove, even when standing on a kitchen chair. I think most of my siblings have that memory (and possibly used the same pan).

One summer when I was about 5 or 6 years old, other families were sending kids off to camps, summer school, and swimming lessons. Mom created a summer program for me and my six older siblings. We were each given a folder containing lessons customized for each of us in reading, math, writing, science, home-care, self-care, sewing, music, and cooking. We were also each provided a stainless silver bowl with measuring cups, utensils, a flour sifter, and an apron.

My parents were geniuses for coming up with this idea. We raised a garden and always had fruit from the many citrus, fig, pomegranate, peach, apricot trees my dad planted on our irrigated. We ate as much as we could fresh and learned to preserve the rest. We raised rabbits and chickens for food as well. And everyone learned to make bread by hand. The things I learned from my parents are lost arts and many people never learn them. Fortunately, it seems there has been a kind of return to these skills by others among my generation, I think partly due to economics as much as the general desire for handcrafted, organic, and localized goods.

Cooking stayed with me. By high school I was spending hours after school at my friend Marie’s house as she tested new recipes and let me act as sous chef. I still remember the day she and I made red velvet cake. I had never heard of such a thing. I think it called for a half-cup of red food coloring! It was chocolaty, moist, and accompanied with a cream cheese frosting. It was the most decadent thing I had ever tasted.

When I turned 19, I served a full-time mission for the LDS Church in New York and Los Angeles. I had never been far from Mesa, Arizona and I went to live and work in cities that are epicenters for the world. People from every nation and culture live there and I was exposed to the most exciting cultural experiences through their foods! In New York, I ate a lot of street vendors’ food—everything from gyros on the Upper West Side to spring rolls and rice noodles in Chinatown. I had no idea there were so many variations of tamales, tacos, and sushi until I lived in Los Angeles.

As a missionary, I was very poor (and not sent to eat, but to do missionary work) so dining out was the rare splurge. Occasionally, a kind person would treat us to a meal and invite us to enjoy an otherwise unaffordable restaurant. Such were the occasions with the delightful native New Yorker Dorothy Rinkowski. The expansion of my culinary knowledge to international dishes is due in large part to this woman. Almost every Wednesday night she invited us to meet at her apartment on the Upper East Side. She would either walk with us to a nearby restaurant or call in an elaborate meal. I literally had never been exposed to Indian food, and had no idea BBQ could be different from city to city or that Soul Food was its own genre of food until my year with Dorothy.

Each week at the D’Agostino or neighboring bodega, I would look for new items (such as bean thread, fennel, sriracha, or plum vinegar) and I would either recreate by memory something I had tried and loved, or I would experiment (I didn’t have many cookbooks or the Internet). After a year in New York, I boarded a plane with my 5 suitcases and moved to (sprawling, disconnected, have-to-drive-a-car) Los Angeles. I was miserable. I missed interacting with people on the streets as I did in NY. Then I started connecting with the people of LA and their cultures through food.

In LA it was tacos a hundred ways with Mexican immigrants. Empanadas with Porteños the way my dad had described them from his time living in Argentina. Whole pit roasted suckling pigs at luaus with Tongans. And from the Filipinos, some weird dessert concoction with purple ice cream and beans (I’ll still never really understand that one). And here in LA, my addiction to sushi was born.

When I concluded my 2-year mission and returned to Arizona, I cooked for everyone who would let me as I did I told stories of the people I met and the food they introduced to me. I began catering parties and weddings for family, friends, and neighbors. I started a themed party program called Passport with a group of friends. I issued them a “passport” booklet that I had designed, printed, and assembled and each month we had a dinner at a different house. I prepared food, a pamphlet on culture and customs, I decorated the dining rooms lavishly, and during our meal we enjoyed a performance or language lesson by a native of the country we “visited.” My friends would tell me how much they looked forward to receiving their “itinerary” and tickets in the mail each month then anticipating another adventurous evening of food and culture. Cooking is a chance to go on a new experience with someone — especially if they share the same passion and joy of food as you. 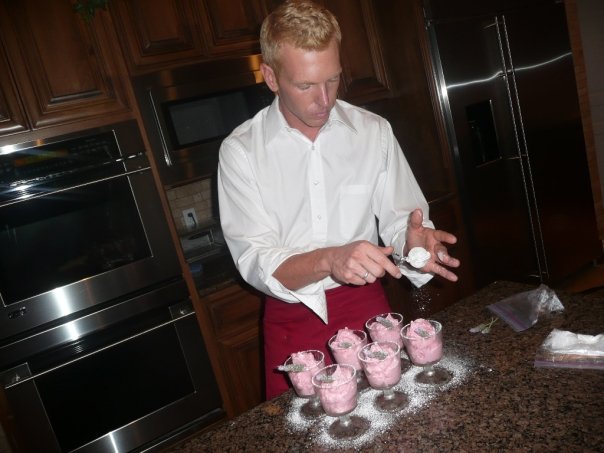 I’ve always been kind of a homebody. I didn’t date much in my twenties and unless I was going out for a specific activity I stayed home. Fortunately, I loved hanging with my baby sister Kim. We kind of had our “date nights” for several years as she went through junior high and high school. Fridays I would make tons of sushi, handmade pizzas, or angel hair spaghetti tweaking the sauce recipe and we would laugh off the calories watching ABC’s T.G.I.F. programming. Ahh, I miss those days. (Did you read that, Kimi? I miss you!)

Cooking served me and my (well-fed) roommates all through college. My best friend Ginny and I became friends one night as strangely we found ourselves sitting on her kitchen floor organizing spices and creating children’s names from them (Cinnamonique, Basilandra, Cilantrel, etc.) She and her roommate Emily would show up at my door and with an Iron-Chef-meets-Survivor challenge asking me to help them create dinner out of the last 3 remaining food items in their houses. Eventually I left college for New York where I had a short-lived opportunity to pursue contributing some of my work to Martha Stewart.

In my late twenties I moved back to Arizona staying in my parents house in the room next to my grandmother who lived with my parents. She was my biggest fan when it came to cooking. I’ve never had someone so excited to eat what I prepared. She always said, “You should have a restaurant!” Maybe someday, Grandma. But I just enjoyed cooking for you because it made you light up.

I’m glad I found in Keith someone who also loves cooking and food as much as I do.  Keith and I have unwritten rules about cooking and dining: when eating out we must always try the calamari if it’s on the menu (side note: the best calamari ever is at NoRTH in Scottsdale, Arizona), and on weekends the kitchen is all his. We would both love to marry Ina Garten just so she would make dinner everyday of our lives.

Keith comes from the South and has an affinity for cornbread, biscuits and gravy, bacon, and baked goods. Really, all things I love but don’t gravitate to naturally which adds to the kinds of meals we enjoy. He almost always uses recipes and when he does it exposes me to ideas I didn’t think about before. Living and sharing a kitchen with him has also helped me considerably improve my cleanliness in the kitchen as I cook. Keith and I are regulars at the Hollywood Farmers’ Market nearly every weekend where we shop fresh produce, fish, and handmade goods while participating in a community that values food as sustenance for the soul as much as it is for the body.

Cooking speaks to all of my senses. It’s a joy I’m proud to know even if it’s just for me and Keith. It’s everything behind-the-scenes as well—the fragrance of garlic, the crackle from the skillet, and the sight of a perfectly roasted bird coming out from the oven. I have no goals to make cooking a profession but I continue to put great effort into it because I find the same creative principles apply to making food as they do to music, dance, illustration, and singing. It’s just one more step in the circle of creation from seed or conception to death and re-creation.

Cooking a meal is one of the most personal and intimate things you can do for someone. You’re literally providing plated nourishment made with your own hands and creativity — even if you’re following a recipe, you picked the recipe and planned the meal, didn’t you? Ultimately, food is an essential, a common bond that connects all races, nationalities, and backgrounds. There’s something about the basic nature of it that encourages us to connect with each other.

I hope we get a chance to share a meal together soon! – JR